App
Cost How much will
my app cost?

Mobile phones are no longer used for making phone calls. In fact, a small total of 7% of the time is spent on communicating directly via calls or text messages. It can be assumed that the rest of a user’s mobile experience is spent inside apps if not in the browser. Each phone is completely personalised to its owners’ lifestyle, with any app you could ever dream of available for download in the App Store. Only a portion of apps however, are completely personalised for a specific phone. 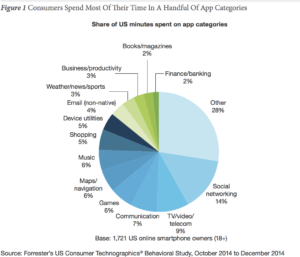 iPhone and Android run on different operating systems and therefore must be coded, and even designed, differently. What happens however, if someone wants to create an app for both devices? Must they create two different versions for each device? Or can it be coded once and work on both iPhone and Android? The answer is yes, to both. Through either native or cross-platform development, an app can be designed and coded for both platforms to match your needs and budget.

iPhone and Android devices both run on different operating systems.  Native development works by building an app to best suit the desired mobile platform, right from square one. The application is coded using a purposefully chosen language targeted at the particular mobiles operating system and its functionality.

If you want to integrate the device’s hardware and functionalities, (such as the phones camera or the use of swipe gestures) then native development would be the preferred option. It also completely tailors the apps UI and UX to that of iOS or Android. Native development results in faster and better working code, also allowing for easier integration of new features down the line. All the while more efficiently consuming the phones battery, memory and CPU.

This comes at a cost, however, as essentially two versions of the app must be created. One for iPhone and a second for Android. This often more than doubles the work involved in app development. Two versions of code and designs need to not only be created but also tested. This is more complex and will definitely be reflected in the invoice you receive. If this is an issue, native development isn’t your only choice.

Cross-platform development takes a ‘write once run anywhere’ approach. This allows developers to build apps for different operating systems on one software. As a result, the code of the app can be shared and adapted to the devices operating system when it otherwise would have been incompatible.

Cross-platform is preferred if developing an app for both devices is desired, however, the budget doesn’t account for developing two separate versions. Not only does it reduce the costs, it also reduces development time. Cross-platform allows for maintenance and updates to be completed for both platforms at the same time as well.

The downside of ‘write once run anywhere’ is that the UI and UX are not tailored to best suit the interface of each device. For example, Android has a back button. Whereas Apple integrates their counterpart in the interface of the app, more specifically the navigation bar. Apple also has their tab bar at the bottom of the screen. Whereas Androids is often at the top. When building cross-platform, one design is used with the one set of code for both devices. This means that each device’s usual interface is compromised in some way. The app won’t look or feel quite like what the user is used to and you may be asking your user to re-learn. There are some ways around this by creating a flexible design that looks familiar to both platforms, essentially creating your own experience. Instagram is an example of cross-platform done well.

You should choose native development if you’re heavily integrating gestures or the device’s features. It’s also recommended if you’re building a game, an app that works with a lot of data, or focuses on design or the user experience. Users may not notice the difference in code when it comes to cross-platform development, but they will definitely be able to see the difference. For example, an app that doesn’t feel very ‘Appley’ or feels distinct from the usual Android interface. If this is a difference that will be noticed negatively, it’s wiser to opt for native development.

Cross-platform development is appropriate for more basic apps or quick prototype development. Business apps or companies who desire an exclusively informative app would also benefit from cross-platform development. These are apps that have a simple interface, has limited swiping and doesn’t require access to many of the devices hardware features. This is because the design of the app or the use of hardware doesn’t hold as much significance to the user experience. In fact, 20% of all App Store rejections come from bugs and UI design issues. If UI is important to the success of your app, cross-platform isn’t for you.

Native app development allows for a superior user experience and in an ideal world, would be the chosen development method for all apps. However, with budget and time constraints the app development world is far from ideal. This is when cross-platform development is a beneficial way to get a professional working,  yet a basic product.

Understanding Augmented Reality (AR) And Its ...

Augmented Reality (AR) is an enhanced version of reality where real-world objects are augmented using a technology that overlays computer-generated content onto a user’s view of the real world – the virtual content appears to become part of ...

How Leveraging An API Adds Value To Your App

Application programming interfaces, better known as API’s, enable many of the digital experiences we take for granted. Everyday behaviours such as ordering a pizza are made possible by leveraging API’s. How does an API have anything to do with...

The Hidden Risks of Hiring a Freelancer to De...

Many clients head off in search of a freelancer who can develop their mobile app for half the costs quoted by an agency.
41% or one-third of the Australian workforce have jumped on the trend and now work freelance. Thanks to platforms&#...

Mobile apps are now a prominent business tool for any startup, large corporation or even small business. This is great news for any app development agency, whose services are now in high demand thanks to the insane growth in mobile phone use in re...

iPhone X Event: Everything that was unveiled ...

This morning the September Keynote from Apple unveiled multiple new models of the iPhone along with a new Series 3 Watch and 4K TV. Firstly the keynote began by showcasing the new Steve Jobs Theatre, which reflects everything Apple is about. Shots...

How To Get Your Start-up’s First Users

Whether you are already an entrepreneur or an aspiring one, you should know that the struggle of getting your start-up’s first users is a difficult venture. Unfortunately, investing so much into creating something that you think is great is ...

Mobile phones are no longer used for making phone calls. In fact, a small total of 7% of the time is spent on communicating directly via calls or text messages. It can be assumed that the rest of a user’s mobile experience is spent inside ap...

Funding is the number one factor that can drive or restrict your startup idea becoming a reality. While bootstrapping (essentially doing everything yourself or hiring people on the cheap) is an option, this can lead to some obvious issues along th...

Prepare Your App For The iOS 11 Update

Apple announced a bunch of new goodies and software surprises for release later in the year at their annual WWDC back in June. Amongst the excitement surrounding the new HomePod and iMac Pro was the unveiling of the newest iOS 11 update. The devel...

What Makes a Successful Mobile App?

An estimated 3 billion people in the world will own a mobile device by 2020. So, it’s safe to say that an increase in mobile users is more than likely going to increase app downloads and usage. The revenue of the app industry, therefore, will refl...

Let’s chat about your idea.

Come into the office and meet the team, show us your side of the world on skype or meet us at your favourite hole in the wall for a coffee!
Book a Free Consultation
Apps People has years of experience with iPhone & iPad (iOS) and Android development. Since 2010 in fact!